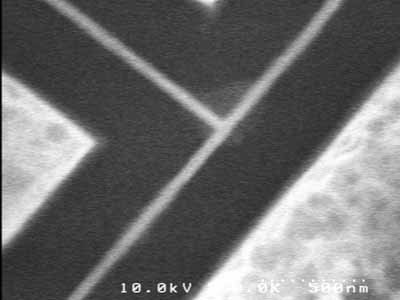 The micrograph shows a T-junction of Ni nanowires.

We have successfully fabricated self-assembled metallic nanowires by manipulating crack patterns in thin films and then using them as molds for nanowires.

Usually a dielectric film is deposited on Si substrate. This is followed by the lithographic addition of crack initiating features and annealing of the thin film.

Resulting cracks serve as extremely uniform and straight molds, which are subsequently filled with a metal. After removal of the dielectric film, free standing nanowires are obtained.