Stress-induced martensitic transformations are clarified in classes of NiMnGa alloys which undergo the stress-free, thermal-induced inter-martensite transformation austenite (A)â¥®pre-martensiteâ¥®(PM)martensite. This study implements a comprehensive experimental approach, including analysis of the strain-temperature and stress-strain response, which discloses stress-induced inter-martensite transitions. The evolution of the transitions is elucidated utilizing in-situ digital image correlation (DIC) measurements of meso-scale strain fields. Under stress, this body of work unequivocally demonstrates that the transformation path becomes Aâ¥®PMâ¥®Iâ¥®10M. The I-phase is an intermediate stress-induced martensite having a modulation period between 3 and 5 layers. Due to the intermediate transition, the thermal hysteresis in the strain-temperature response is tiny (< 10 Â°C) compared to the hysteresis (32 Â°C) for Aâ¥®10M. The differential hysteresis levels are rationalized based on a thermo-mechanical formulation. Meso-scale DIC measurements quantify inter-martensite strain levels, which are indistinguishable from macro-scale stress-strain and strain-temperature responses. 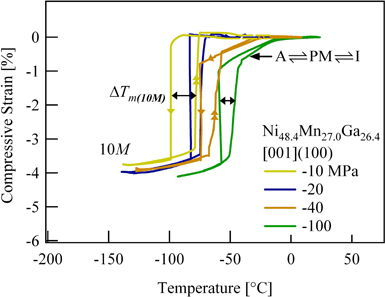 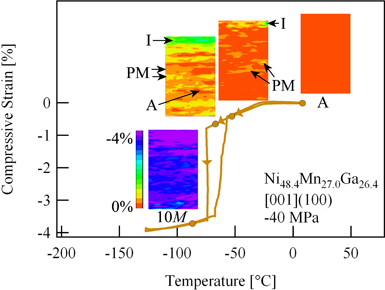 The compressive stress-strain responses at -60 and -70 C showing two stress plateaus, which evidence a two stage transformation path, are shown in Fig. 3. In-situ DIC strain images are included at -60 C. Based on the evolution of the meso-scale strain fields, the pre-existing, self-accommodated pre-martensite (PM) phase reorients and detwins at the first stage. During the second stage, an intermediate martensite phase (I) is stress-induced from PM, which then converts to the 10M phase. 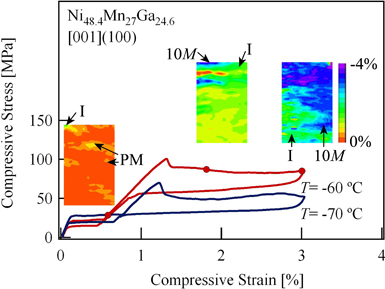